Balochistan is not Bangladesh, but its worth trying !!!


Suddenly Balochistan is in news. Credit goes to Shri Narendra Modi, the Indian PM. Most of the people in India never knew about Balochistan. Coming directly to the subject. Many of the people are getting an impression that India can easily separate Balochistan from Pakistan, as they did with Bangladesh (East Pakistan) in 1971. This perception is wrong because of the below key differences between Bangladesh & Balochistan.

Differences between possibility of Independence between Balochistan & Bangladesh 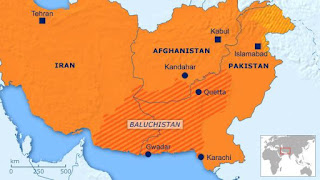 Based on above points, its very clear that India can't play a role in case of Balochistan as it did in case of Bangladesh. It has to use only covert means.

How India can support the Struggle:-

India can support the Baloch cause in various ways

What India can attempt for below objectives:-

India can objectively achieve to target the below using Balochistan, as India is a peaceful democratic nation and may want to elevate more people out of poverty rather than war


Hopefully, Balochistan can serve to fulfill the above three objective and make the people of Indian subcontinent improvise on their standard of living
Posted by Madhav at 11:53 AM No comments: